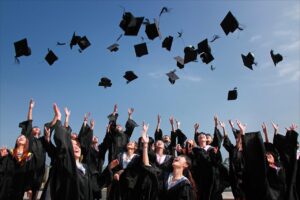 Ah spring, the perfect time for soaking up amazing weather, picnicking by the beach, and publicly insulting large groups of people with sexistly-charged insults and not receiving any backlash. How do I know this seemingly niche piece of information, you may ask? Well, the results of an extensive survey that pulled data from over seven Northwestern students showed that springtime was the number one season for safely calling people “hags.”

One particularly petty survey respondent named Theodore admitted that he ran into the middle of a crowd at the Rock during finals week and shouted, “HAGS, HAGS, ALL OF YOU, HAGS” while pointing all around in a dramatic fashion. While Ted meant it as a theatrical insult to certain members of the group, he was instead met with cheers, whoops, and even hugs. Everyone seemed deeply touched by what he was saying.

When Teddy realized what was going on, he decided to take this trick to a new level. For the rest of the week, he neglected studying for his exams and instead bitterly shouted “HAGS” everywhere on campus.

“It’s so great,” he later told sources. “I mean, everyone knows it’s super fucked up to say something mean straight to someone’s face, no matter how badly you want to. That’s why I always keep my judgments to myself and only tell a group of like 2 to 35 friends in super private spaces like the dining hall or something. But there’s no need for these respectful gossip sessions anymore!” he exclaimed. “I can say my insults right to those hags’ faces without them even knowing!”

Before finishing off his interview, Teddy bear expressed his gratitude for being given the opportunity to share his story and then closed his remarks with a rather peculiar farewell as he looked each researcher in the eye and said, “See you next Tuesday.”