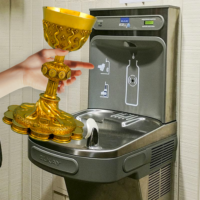 While choosing to ignore the red filter status on his dorm’s water bottle filler, unhealthily dehydrated sophomore Billy Smith decided to see how many plastic water bottles the environmentally friendly machine had eliminated. Instead of an impressive number, however, he was met with ancient hieroglyphics—which he immediately interpreted as directions to the Holy Grail: the most sacred water bottle of them all.

Ever since that day, Smith has been frequenting every single bottle filler on campus, desperately trying to connect the dots. He has already bought plane tickets to Egypt and has been in contact with the Monty Python Comedy Group, who are now trying to reestablish themselves as documentarians. They will be accompanying Smith on his journey, but instead of flying, they will be using imaginary horses.

Despite his progress, he has hit a few discouraging roadblocks. Just last week, two of the three fillers he visited boasted real numbers. He stared at the screen for hours, waiting for the image to change before his eyes, but it still said “100,000 plastic bottles saved.” In a fit of rage, he punched the machine ten times. The machine was fine, but Smith ended up in the hospital with a broken wrist. “Who cares about the environment?!” he shouted from his hospital bed. “I’m trying to save all of humanity!”

It’s been a few months since Smith’s friends have seen his dorm room. According to one witness, his walls are covered in ripped out notebook paper, connected with red string into an incomprehensible constellation. “I’ve looked at those fillers,” one friend worriedly whispered as Smith frantically scribbled behind him, “and I’m starting to think he’s just seeing things. You know he’s already dropped out of school for next year?”

Whether Smith ends up in a mental hospital or history books, he certainly is a man on a mission. Many students are thankful for his efforts to showcase the fillers around campus that are in desperate need of repair.

Articles, Featured, Latest News, Local, No. 353, Year 15 Holy Grail, hydrate or diedrate, Monty Python, water fountain, what the heck is up with those water fountains???