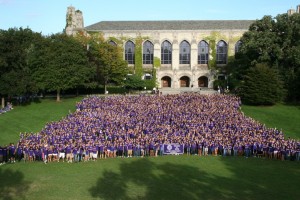 EVANSTON – Following a surge in applications, Northwestern University admissions officials have announced that they will be forced to expel the entire Class of 2014 in order to free up room for the new, more desirable Class of 2015.

“We received over 30,000 applications this year, and each one of these applicants is more qualified for a spot at this school than any of you overly complacent pricks,” Dr. Dan Kaufman explained to recently oust former freshmen. “They’re smarter, they’re more athletic, and they write personal essays like a sonovabitch. Have you seen these extracurriculars? Let me show you something.”

“Two nearly identical students; their names, their appearances, and their mannerisms are completely interchangeable, correct?” The crowd murmured in agreement. “Here’s the difference! Rebecca speaks three languages; Becky only speaks two. Slovak would take you much further in life, my dear!” Kaufman sneered, patting Becky on the back patronizingly.

“Rebecca scored an extra 30 points on her SATs, and while Becky enjoys wasting her Saturday nights getting shit-faced at frat parties, Rebecca spends hers writing operas for the New York MET and perfecting Shakespearian monologues. Why, I’d wager that if Rebecca were to… ‘replace’ Becky in her sleep and attend her classes, not one of you could tell the difference!” Kaufman laughed maniacally as the lecture hall cleared. Following the reception, I was approached by Miles Bennell, former Bienen Music Education major.

“I should have known something was up,” Bennell told me. “The other day, I woke to a funny smell and strange substances oozing up from the floorboards under my roommate’s bed. My roommate was a few inches taller and suddenly played clarinet, but I assumed he had just been hiding it to protect his masculinity.”

Because they devote their lives to pure, reckless academic perfection, members of the Class of 2015 exhibit antisocial behavior and are unable to process emotion. Many have even begun to display sociopathic tendencies, killing off their doppelgangers in the current freshman class so that they can begin their studies immediately.

RTVF majors, noting the phenomenon, have likened the scenario to Don Siegel’s 1956 classic Invasion of the Body Snatchers and begun calling incoming Northwestern freshmen “pod people” because they get off on that kind of clever shit.

Upperclassmen are advised to avoid making any action that could be construed as a display of weakness, especially near freshmen who fail to demonstrate clear signs of emotion and active social life. Upperclassmen are also cautioned to smother younger siblings to prevent potential usurpers from seeking admission. By no means can a Class of 2016 be allowed to apply, or we’re all fucked.