Northwestern Accepts all 30,000 Applicants, Awards No Aid to Increase Budget 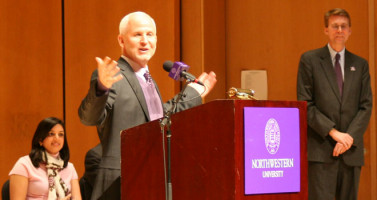 EVANSTON – President Morton Schapiro announced Wednesday that the Admissions Office will not be printing out any rejection letters this year. Schapiro stated that the purpose of this decision was to “allow the benefits of Northwestern to reach as many students as possible.” His eyes then shiftily darted left-to-right several times, and numerous audience members swore that Schapiro said “Cha-ching!”

Schapiro’s remarks were made in a joint press conference with University Director of Financial Aid, Carolyn Lindley. Lindley stated that the University would not be awarding any financial aid to the incoming Class of 2015. “Just as we are allowing ‘the benefits of Northwestern to reach as many students as possible,’ we want as many students as possible to benefit Northwestern. Quid pro quo, am I right?”

President Schapiro, an economics expert who has done extensive research on university capacity and aid strategy, explained that a wonderful vision convinced him to abandon his years of study. “After the success of the new ice-skating rink at Norris, I just could not stop thinking about how I could expand this joy to the entire university. I was walking along Sheridan Road, when I slipped on a patch of ice. I fell to the ground and was knocked unconscious. The answer came to me then, in a dream: we should cover every sidewalk and path on the Northwestern campus in ice, allowing students and faculty to skate from class to class. What could be more wonderful?”

Lindley, when asked to comment on whether the President’s vision for an ice-covered campus had any impact on the decision to withhold aid, affirmed that this was a factor in their decision. “It is expensive not only to cover our miles of paths in ice, but also to keep these paths frozen. Evanston is not in Alaska, and ice melts in the spring and fall. Refrigeration costs alone are expected to exceed one billion dollars.”

Schapiro concluded the press conference with some comments about student housing. “Obviously, accepting 30,000 students will create space issues in the dorms. We are considering several options, mainly converting every double into a quintuple. However, we will most likely take no action, as we are anticipating a high number of ice-related fatalities next year, and this should free up some space in the dorms.”