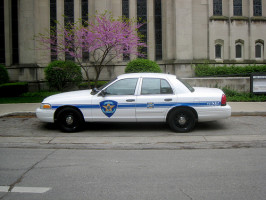 EVANSTON – Keeping with the historically progressive nature of the Evanston government, the police department issued a new technique to limit public unrest: the brothel-lizer.

The brothel-lizer is an oblong white tube inserted anally to check for brothel residue.

“I might not be a proctologist,” said deputy chief Victor Rudo, “but working at the police department has given me plenty of experience fucking kids up the ass.”

Evanston officials are considering the addition of a volunteer brothel-lizing department. Several high ranking Northwestern faculty members have suggested they are ready and willing to serve.

Not everyone is happy with the brothel-lizer. Northwestern students are up in arms over the risk they pose to the thriving underground brothel scene. On Chicago Avenue alone there are over sixty-three brothels, according to the city of Evanston.

“I am 22,” said senior philosophy major Abby Marder. “If I want to spend my weekend at a brothel, I should be allowed to. Mom and Dad aren’t here anymore to tell me what to do. This is college.”

Marder is not alone. Brothels ranked fourth in a questionnaire sent to incoming students about the reasons they applied to Northwestern. It was beat out only by the slippery-ass walkways, Morty Shapiro, and the fine athletic program. It placed three spots ahead of academics and fifteen in front of Chet Haze.