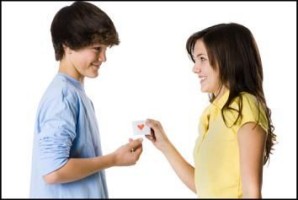 EVANSTON – In a breakup that shook Haven Middle School girls’ faith in love and sent shockwaves throughout the seventh grade class, “it” couple Brett Flores and Bianca Tobin have broken off their almost-month-long relationship, the longest Haven’s seventh grade had seen.

The breakup came after Brett IMed Bianca “Brett + Bianca = 69”, after which Bianca sent the crushing reply, “we R thru.” Sources close to the couple could confirm that while the couple had yet to reach 69 status, they had held hands with fingers laced and even grinded at a dance.

The couple’s breakup came as a surprise to friends and family of the couple alike, who wondered how a relationship between two people who had been rock-steady for so long could have ended so abruptly.

“I, like, don’t understand how they could be over; they were, like, destined to be together. If a couple as meant-to-be as them can’t stay together, how is there hope for anyone else ever?” Bianca’s friend Shannon commented.

In the aftermath of the breakup, Mike and Lindsey have become the new reigning relationship champs, clocking in at 10 days.