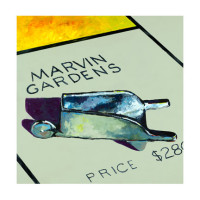 ATLANTIC CITY – In what is surely a game for the ages, the wheelbarrow is about to win a game of monopoly. It has $1300 in cash and owns the red monopoly, consisting of Kentucky Avenue, Indiana Avenue, and Illinois Avenue.

“I just knew my business was turning around when I landed on Indiana Avenue,” the wheelbarrow commented. “Seriously, there are now three stunningly beautiful houses here! Who wouldn’t want to stay in one of them and pay me $700 to spend the night here?”

The wheelbarrow also owns Park Place (but not boardwalk), St. James Place, and St. Charles Place. “He sure has a lot of places,” enviously remarked the thimble.

In addition, the wheelbarrow has not one, not two, but THREE of the four railroads. “I was sure excited when the dog accepted $200 and the electric company for the Short Line. Now I only need B&O Railroad and I’ll have the set!”

In a surprising twist of events, the wheelbarrow rolled a three, advancing from the Water Works to Pacific Avenue, part of a monopoly owned by the money bag. This reduced the wheelbarrow’s assets from $1300 to $25. “That’s ok!” said the wheelbarrow with a cool calmness only seen on entrepreneurs sure to succeed. “I’m about to pass go and collect $200. I mean, there is NO chance I’ll roll a three again next turn and visit the hotel on Pennsylvania Avenue and be forced into bankruptcy. It’s absolutely impossible.”

As the game entered its fourth straight hour, the racecar rolled doubles three times in a row and went to jail. “Guess I was speeding,” he remarked.

At press time, no winner has yet been reported.