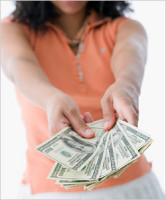 WASHINGTON, D.C. — Congress passed an unprecedented bill Thursday creating an investigative task force to oversee the nation’s second-largest underground industry: babysitting. Rep. Paul Ryan (R-WI), who sponsored the bill, explained that the bill “will not only provide an additional source of revenue for our nearly-broke government, but it will also send a message to Americans: you cannot get away with tax fraud!”

The bill targets preteen and teenage babysitters, who every year collect billions of dollars of unreported income. “The government does not know how much money goes untaxed,” said Ryan. “It’s all cash transactions. For all we know, these babysitters could be illegal immigrants!”

The bill has garnered bipartisan support in both the House and Senate. Rep. Steny Hoyer (D-MD), House Minority Whip, explained the Democrats’ position in a prepared statement: “While we are appalled by the contents of this bill, we are so desperate for any tax increases at all that we have decided to support it. The Bush-era tax cuts continue to cripple the government; we need more tax revenue. Now.”

The bill will employ thousands of federal prosecutors who will lurk outside elementary schools and in neighborhoods with high proportions of children. These “watchdogs” will try to identify babysitters who are paid in cash and file reports to the FBI.

FBI agents will then arrest the babysitters, who will be held in prison until the income taxes they should have paid are paid (plus the standard tax evasion fines), or for a period no longer than five years.

Surprisingly, the only strong opposition to the bill comes from the Tea Party. “Gosh-darn that Sixteenth Amendment,” said potential presidential candidate Sarah Palin. “The government should be lowering taxes, not arresting babysitters! As a mother, I know just how essential these little girls and boys are to middle class America. If I couldn’t pay a fraction of minimum wage for childcare, I sure as heck couldn’t afford so many shoes!”

In addition to prosecuting babysitters for past tax fraud, the bill also includes language that will make such fraud impossible in the future. Beginning in 2012, it will be illegal to pay babysitters in cash. People employing babysitters must deduct taxes from paychecks and also prepare W-2 forms to give to the babysitters, who will then have to file income taxes each year.

“This bill represents the American way,” said Sen. Jon Kyl (R-AZ). “Ninety percent of preteen and teenage babysitters use their unreported income to pay for abortions, and this bill will help solve this epidemic.”