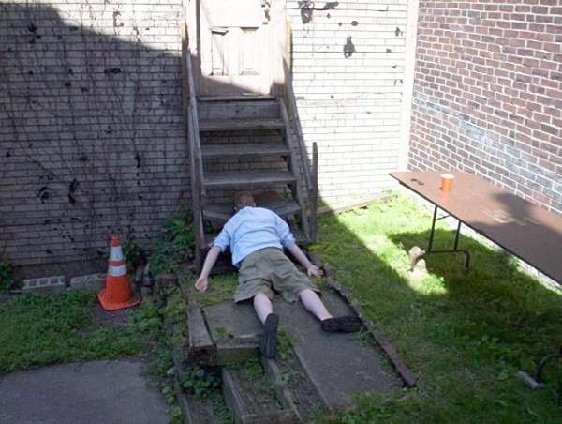 SKOKIE – One Northwestern freshman spent the most anticipated day of the year aimlessly wandering through the scenic village of Skokie. The hours of a.m. drinking forced David Eager to head West on Dillo Day, instead of East toward the lakefill.

“There are really only two things you need to know how to do on Dillo Day,” Mayfest co-chair Chase “Maystache” Jacksons explained to Flipside investigators. “Drink large quantities of alcohol and have the common sense to head towards music in the same direction as a shitload of people.” Eager managed to accomplish the first task so well that the second became difficult.

“I was just drinking whatever people were giving me, hopping fences, going from house party to house party. Thought I really built up my stamina from that ‘Defining Moments’ party last week. Guess not.”

Eager got separated from his friends after experiencing confusion as to where exactly Simpson Street ended. He decided to head toward the Lakefill to meet up with them, but by this point the freshman was seriously disoriented.

“I had no clue where I was, let alone which way to go. I just picked a direction and started walking, hoping I wouldn’t be late to my first Dillo Day.”

Skokie police officers found Eager in a park next to Old Orchard Mall “mostly fist pumping” in front of a swing set.

“Once I found an open patch of grass, I thought I was there. It wasn’t until my buzz wore off in the squad car that I realized something was wrong…mainly that my buzz was wearing off.”

One Skokie resident tried to aid the “clearly out of place, slightly abusive, and heavily pee-stained” NU student.

“He kept asking me where the pornographers were,” the resident informed The Flipside. “Also something about how ‘Bob’ had nothing on me. I don’t know any Bob.”

After the embarrassing rookie mistake, Eager plans to take preventative measures for next year.

“Dillo Day 2012 is going to be the best. I’m going to camp out on the Lakefill the night before. Just in case.”