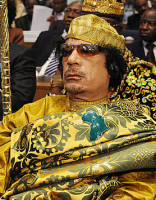 TRIPOLI – In a bold choice of evasive strategy, former Libyan dictator Muammar Qaddafi has opted to dress in normal attire in order to hide from Libyan rebels.

Typically known for his bold, outlandish outfits, Qaddafi has come to the real

ization that one possible way to avoid recognition is to remove all searingly bright, leopard-print and fur-trimmed outfits from his choice of attire.

In an official statement released from the Qaddafi camp, the fleeing dictator asserted, “I’ve enjoyed many a year with the title ‘Most oddly-dressed dictator’ – though good ole Kim-Jong Il certainly has given me a run for my money. However, I’ve decided that now is not the best time to go around looking like my crazy self.”

Unfortunately, this strategy will likely prove somewhat effective for the ruthless leader. Though the Libyan rebels have been successful in overtaking the vast majority of Tripoli and the rest of Libya, it is very possible that their goal of capturing Qaddafi and punishing him for his egregious human rights violations will prove much more difficult now that Qaddafi has managed to make himself appear like a normal-looking asshole.

A leader in the rebellion groaned, “We really thought our task wouldn’t be that terribly hard. With those ridiculous sunglasses and oddly patterned outfits, his entire being just screamed ‘insane dick.’ Now, only his demeanor and complete disregard for human rights point to his identity as an irrational despot.”