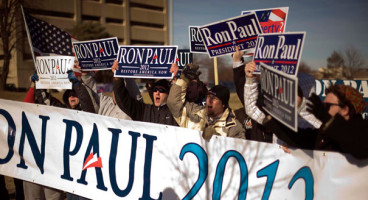 DES MOINES – Last Tuesday, Iowans gathered in gyms, homes, and other buildings across the state to discuss who their favorite old white guys were.

Herds of people thronged in and around buildings. They stood around and talked for a while. Some people waved signs with pretty decorations. There was a lot of shouting. Then they wrote a name on a piece of paper and left. This name was the name of their favorite old white guy.

The old white guy who had the most people write that he was their favorite was declared the winner.

At some points, the discussion became intense argument; no one was injured, though there were reports of bruised feelings.

A mere five old white guys seemed to capture the favor of the majority of Iowans, which is rather remarkable considering how many old white people there are in Iowa. A few of the five leaders didn’t look all that old, actually, and these younger old white guys appeared to have the strongest support. However, opponents of each old white guy were fiercely mistrustful, and no single white guy captured more than a quarter of the Iowans’ favoritism.

The old white guys were reportedly seen at various points around the state preceding the gatherings. Eyewitnesses claim that one was overweight, another was short with a piping voice, one was wearing flip-flops, one was described only as “frothy,” whatever that means, and one seemed rather forgetful. None of the old white guys appeared to be from Iowa, which is maybe why the Iowans were so reluctant to choose one as their favorite.

A few people voiced their support for a youngish white woman, but these people were ridiculed by fellow Iowans, as they evidently misunderstood the purpose of the gatherings.