Athlete Fails to Grasp Why 110% Sale Is Losing Money 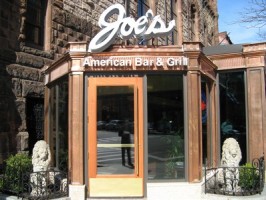 EAST RUTHERFORD, NJ – NFL Hall of Famer Joe Namath will not be entering the hypothetical Well-Run-Business Hall of Fame. Namath was sad to announce Sunday that his restaurant, Joe’s Bar and Grill, will be shutting its doors permanently at the end of the month. Namath attributed this decision to the fact that he “was losing money faster than [he] can throw a football. Customers would walk in, flash a coupon, and walk out with a wad of cash.”

Namath produced one of these coupons, which are littered around the store. “We’re giving 110%! 110% off everything!”

Namath, quarterback for the New York Jets from 1965-1976, turned to the food industry as a hobby following his retirement. He explained his restaurant philosophy: “I wanted to translate my outlook on sports onto my outlook of running a business. In a game, I would always give 110%, nothing less. To attract customers, I’m giving them the same 110%.”

Namath said he regrets translating his 110% vision into this permanent sale rather than into some other aspect of the restaurant, like portion sizes, food quality, or the amount of alcohol in a shot of his personal whiskey.

The grounds of Joe’s Bar and Grill have already been purchased. Jimmy Sexton, agent for many high-profile athletes, released a statement Tuesday that one of his clients will be operating a new restaurant called Tim Tebow’s Terrific Turkey Toasties.