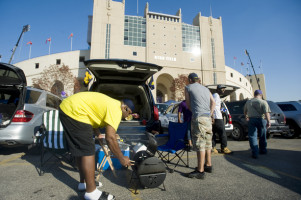 EVANSTON — Delta Delta Delta Delta reported to The Flipside that their tailgate before Saturday’s football game was a “big success.” Chapter president Andrea Gulotta bubbled, “There were so many people there! We had some drinks, played a little catch, grilled on the porch. We sure showed BYE that the Wildcats are for real this year. Go ‘Cats!”

Although Gulotta was unable to recall the exact score of the game—she said she left Ryan Field around halftime—she was sure Northwestern won. “We’re 8-2 now, right? Rose Bowl, here we come!”

Quad-Delt social chair Leah Keuper said, “I love the enthusiasm Northwestern has for its football team. We’re doing all we can at Quad-Delt to show our support. And you know what? It’s working! The Brigham Young School of Engineers didn’t stand a chance.”

Overhearing this, Quad-Delt sister Mary Sweeney, a native New Yorker, interrupted to correct Keuper, calling her a “silly thing.” “BYE isn’t the Brigham Young School of Engineers,” said Sweeney. “It’s the Bronxville-Yonkers Education College. But you’re right, we scored so many touchdowns today. It was awesome.”

Tappa Tappa Keg brother Joseph Simpson, sipping a free beer from Quad-Delt, informed the girls that, contrary to their beliefs about a Northwestern victory, no points were scored at all during the bye week.

“No points?” said an incredulous Gulotta. “I am so disappointed with our team. Like, were they even playing?”