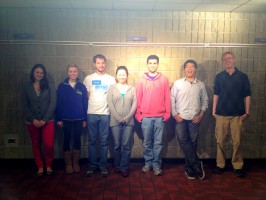 As satirists, we at The Northwestern Flipside take things very seriously. So, when the time came to make the first presidential endorsement in the history of the publication, we bore this duty with the utmost gravity. Our choices seemed bleak: on the one hand, our sitting president has been a dreadful disappointment; aside from an economy that is stagnant and a prison at Guantanamo Bay that is still open, Barack Obama has proved himself to be utterly unremarkable and competent. On the other hand, his opponent is rich, robotic, and rarely shows a natural emotion or idea.

As the nation learned in 2008, the vice presidential candidates can have a huge impact when deciding whether to support a ticket. Once in office, the role of the vice president is indispensable: waiting and secretly hoping for the president to die. We have no complaints about Vice President Joe Biden. None. We are not sure what kind of vice president Paul Ryan would be, but we believe he could not live up to the mighty standards set by good ol’ Joe being a cranky codger.

After considering the probable consequences of the election of each candidate on us as individuals, on the United States, on the whole world, and most importantly, on The Northwestern Flipside, we are proud to endorse Governor Romney and Vice President Biden for president and vice president in the 2012 election.

When Barack Obama was elected in 2008, those of us in the satire community were presented with a mixed blessing. We understood that Vice President Biden would shower us with many opportunities for easy, low-hanging-fruit jokes. We also accepted that President Obama would pose a relative challenge. Let’s be honest: most of us end up secretly asking ourselves whether the joke we just made about the Kenyan Muslim was racist or not.

This year, we are presented with a unique opportunity to continue with what is working and draw new blood at the same time. As your annoying neighborhood politics nerd probably explained to you already, if the electoral college results in a tied vote, the House of Representatives gets to choose the president while the Senate gets to choose the vice president. Since the Republicans control the House and the Democrats control the Senate, we would end up seeing Governor Romney and Vice President Biden share the White House. With this in mind, The Flipside believes that the choice is clear.

Governor Romney has proven that he can provide some of the best material for satire. His real first name is–contrary to those who speculate that it is Mittens–Willard. He once tied his dog onto the roof of his car. He carries around binders full of women. We hear from unconfirmed sources that, if elected, he plans to install an elevator for cars in the oval office.

While this may seem like an endorsement of the Romney-Ryan ticket, we believe that ultimately Biden is the better candidate for the position of vice president. While Ryan’s healthy addiction to P90X and his six to eight percent body fat provided a week’s worth of jokes, there’s only so many “muscle confusion” jokes one can write. Furthermore, Ryan’s uncanny resemblance to the Furby toy of the 1990s is outright unsettling in a way that even satire struggles to encapsulate. Biden’s many documented quirks and tendencies to swallow his own foot provides us an endless possibilities of comic potential. We still remember Biden, the Amtrak-loving son of Scranton who wouldn’t shut up if his life depended on it, smiling his trademark creepy-smirk behind the president during the State of the Union speeches. Imagine the faces he would make behind Romney.

For these reasons, we enthusiastically support a Romney-Biden ticket. In order to achieve the necessary electoral college tie, New Hampshire, Pennsylvania, Ohio, Wisconsin, and Michigan should vote for Obama, while Florida, North Carolina, Virginia, Iowa, Colorado, and Nevada should vote for Romney.