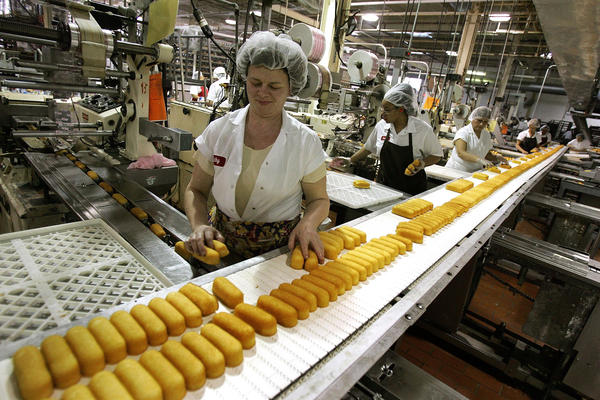 COLUMBUS, GA — Trans fat gourmands across America rejoiced this past week upon hearing that Apollo Global Management LLC, the firm that bought the royal icing of the Hostess empire, the Twinkie, had plans to reopen bakeries and return many of the only semi-genetically modified treats to stores by mid-July. The largest obstacle in resuming production, though, according to Apollo CEO C. Dean Metropolous (besides, of, course, ever looking at a Twinkie again now that he knows what’s in them) will be avoiding the union-related conflicts that shut down the crème-based conglomerate in the fall. But Metropolous has a plan.

“It was a big question, really,” the new CEO said. “How can I hire people to make an alarming product, pay them less than minimum wage, and still not have to worry about anyone complaining or slacking off? And then it hit me: Keebler elves. They’ve been making Chips Deluxe in fudgeshoppe conditions for years and no one has said a word.”

Metropolous went as far as to meet with head elf, Ernest J. Keebler, to discuss his business model. “Ernie said he was able to pay his elven workers in mainly rainbows and smiles,” he explained, “and I really don’t see why that plan can’t work at bakeries in Georgia and Ohio.”

The North American Crème Fillers Association and Confectionery Sugar Dusters International were outraged by Metropolous’ decision to employ elven labor. “We will not stand to see our jobs outsourced to elves!” rallied CSD President Bernie Gustavson at the group’s bi-annual Honey Bun brunch. “No one knows high-calorie and low-quality baked goods like midwestern Americans!”

Representatives from both groups collaborated to write an appeal to Little Debbie, but she was hesitant to take action and advocate for the displaced confectioners after a rumored love triangle between her, Famous Amos, and the Quaker Oats guy scandalized her reputation earlier this year.

Eager to implement the new, hyper-efficient, magic-based production scheme, Metropolous was disappointed to learn that most of the elves were contractually bound in lifetime service to Keebler by a ceremonial toadstool dance. He says he is currently in the process of looking for other mythical creatures willing to work for less than a living-wage, and thought he’d made a break through when he thought of Oompa Loompas. “Imagine my dismay,” said the CEO, “when the rest of the board said I was just showing them pictures of guidos.”