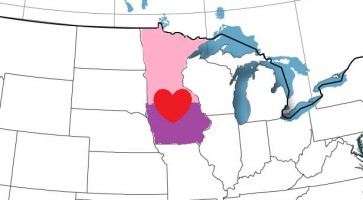 ST. PAUL, MN — Fulfilling the prophecies of evangelical Christians nation-wide, the state of Minnesota has come down with a case of same-sex marriage after failing to keep its distance from infected state Iowa. The contagious legislation was signed into law Monday and the hellfire-summoning nuptials will begin in August.

“I knew when Minnesota started hanging out with the abnormal, deviant states, it would catch their diseases. Minnesota wasn’t born pro-gay legislation; Iowa turned it that way.”

Senators John Kline (R-MN) and Erik Paulsen (R-MN) have pledged to love their state no matter what, but affirmed their belief that this is just a stage it’s going through.

“You know, a lot of states experiment when they get in their 150s, but in a couple decades, Minnesota is going to realize that it wants the traditional constitutional set-up. It’ll get an amendment to correct this and settle down,” Kline said.

Minnesota’s announcement came on the heels of Rhode Island and Delaware also coming out in support of gay marriage. Opponents in Congress fear both caught it from Maine, and are taking measures to stop the pandemic from spreading past New England, which they wrote off as a lost cause in 1993 when they invented the polo/ascot combo.

“God made gays!” Sen. Ron Latz (D-MN), shouted during a heated Senate debate. “And God made gays capable of loving other people. So who are we to quarrel with God’s intentions?”

In related news, Michele Bachman has threatened to leave the state over its new orientation, and everyone has stayed conspicuously silent in response.