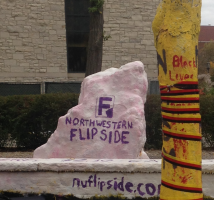 Between the hours of 12:01 AM and 2:00 AM on Tuesday, October 28th, a group of students was spotted painting the Northwestern landmark with white paint. Yes, white. What kind of dicks paint over a racially significant message with white paint? Probably the same people who publish supremely offensive lists of fundraiser ideas in an attempt at “humor” while really indulging the worst sort of lowbrow mockery.

The group wasn’t even subtle as they vandalized the Rock. They could be heard singing along, both loudly and off-key, to 90s classics such as the Spice Girls and the Backstreet Boys. Who could listen to anything but Nickelback’s “How You Remind Me” while covering a powerful social question with their self-referential propaganda?

One student noticed that while they guarded the Rock earlier in the day, the group had a cardboard cutout of actor and former professional wrestler Dwayne Johnson standing in front it. Who could be that shameless? Do they think that they’re clever or funny? We at Flipside are ashamed merely to attend the same university as such vandals.

When these horrible students finished painting, they left the tree next to the Rock untouched, clearly too cheap to buy enough paint to finish the job. The Rock now carries the mismatched messages of Dance Marathon, anti-discrimination, and some asshole student group. A student group who is so blatantly offensive that their very slogan, “Free Everywhere, $2.30 Canada,” makes a mockery of our great neighbors to the North. How do Canadians feel about a message like that? The University as a whole should demand an apology from the culprits.