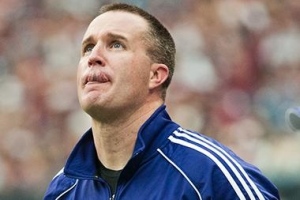 EVANSTON − Citing a high median score and a below average performance, the NCAA has officially rejected Northwestern Football’s request to receive a curve on their football score for this past weekend’s loss. The request sparked controversy among the heads of college athletics.

“If my players can get a curve in CHEM-171, then they should get a curve after playing the Wolverines,” stated Coach Pat Fitzgerald, clearly dissatisfied with the ruling. “How the hell are we expected to compete in the Big Ten anyway? Those other kids are taking fucking Intro to Psych and spend 60 hours a week catching things, it’s not fair.”

“I was hoping a curve would bring my pass completion rate up to at least like, an 80%. I can’t drop any more sports this quarter. I already dropped lacrosse and I need to keep the rest of my sports or I’ll be under my minimum,” said Trevor Siemian, Northwestern’s quarterback. “I just really need to pass.”

When reached for comment, the NCAA charged $700 to speak with an intern, and forced us to sign a waiver explicitly stating that “making money off of college sports is immoral and against the code of the NCAA, therefore if you charge for this content, we’ll sue everyone you’ve ever known, even your Aunt Maggie.”

“If we curve the scores, how are we supposed to show who’s higher up than the median?” the intern read off of a sheet of NCAA endorsed paper. “We make sure our system is the fairest, always ensuring that convicted criminals and players who sell merchandise receive appropriately equal sanctions.”

At press time, Northwestern had dropped the Big Ten as a division and switched into the Mid-American Conference.