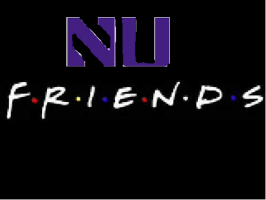 EVANSTON—Student excitement over the recent availability of “Friends” on Netflix instant streaming has been dampened by the recent cancellation of the Northwestern-produced semi-original series “NU Friends.” According to publicity director Annie Social, the goal of the sitcom was “to bring that warm sense of the ‘Friends’ community to campus,” by having each of the six principal characters represent the six NU schools. The Flipside feels that our readers deserve at least a taste of what might have been had administrators watched past “The One the Morning After.”

Raquel “Zelda” Weinberg: The only semi-normal member of the gang, for a long time Raquel was undecided about what she should be majorly interested in. Many consider her an attractive choice, and she generates the most interest among high school seniors. Flirted with the idea of McCormick, but never really committed.

Russ “Ross-A-Tron” McCorRoss: Russ always says that he failed his EA midterm because he “was on a break” from going to classes. Although likely that Russ was in fact regularly sleeping over in Tech to avoid the walk South, he did somehow get a great tan in February. Seems like monkey business.

Channer Muriel ChESP: Nobody’s really sure what Channer studies, but that doesn’t stop him from complaining about it all the time. Seriously, though, what is Studies in Organizational Change?

Phoebienen Phalange: Phoebienen got her start playing ukulele on the streets of Chicago after her mother’s untimely death. After a fire alarm incident, she moved to Evanston, where a certain wild feline inspired her ever-popular “Smelly Cat,” (it gets hot in that costume). She is a little off the beaten path, and science types like Russ can have a hard time reaching her, especially in winter.

Dr. Drake Commoray: Despite his skill at butt doubling, Drake is usually out of work, and often takes up other majors in addition to acting. As a result, he is able to sandwich many other skills onto his resume.

Monana “Candy Lady” Mondill: Monana (it’s Dutch) learns the Dirt on people by asking total strangers lots of insightful questions, and drawing them in with her delicious but garlic-heavy cooking. Don’t steal this one’s thunder, or you’ll hear about it Daily.

With this cancellation, we at The Flipside are forced to accept that it hasn’t been our day, our week, our month, or even our year.