Local Bro Self-Places Out of Sex 101 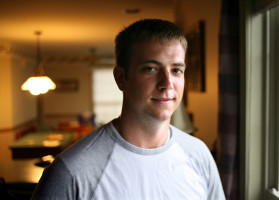 EVANSTON — Following a self-examination of his knowledge of the act of sexual intercourse, total bro Chad Wagner, MEAS ’18, has reportedly self-placed out of Introduction to Reproduction, or Sex 101, the online sex education course to be offered by Northwestern beginning September 28.

The online course will be taught through animated videos addressing contraception, STDs, what constitutes consensual sex, and other topics commonly overlooked by high school sex education classes. However, Wagner contends that his personal knowledge of sex exceeds that of what a college-level course developed by an obstetrics and gynecology professor could offer, and will opt out of the online class during registration this fall.

“Nah, I don’t need Sex 101. I’m no beginner to pleasuring women,” said Wagner when asked to comment. “I bet I could teach that professor a thing or two,” Wagner grinned before pausing, gulping a beer, and asking, “So do you wanna have sex?”

Though course officials assert that “having sex is not the same thing as knowing how it all works”, Wagner cites his years of personal sexual experience, familiarity with the female orgasm, and ability to perform sexually as the reasons for his success during the self-placement exam.

At press time, Wagner was found high-fiving a male classmate over a recent sexual encounter with “some hot, wasted freshman.”