NU Basketball on UNC-Villanova Match-up: At Least We Can Read 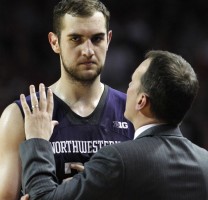 EVANSTON – In the midst of a men’s basketball Final Four where half of the teams have been hammered by academic scandals, various players on the Northwestern team reportedly expressed gratitude for at least being able to read despite not making the tournament this year, or at any time in NCAA history.

“Even though I often envy schools like North Carolina and Syracuse for their rich basketball traditions and tournament success this year, I also recognize the value of basic literacy, which this school gives to athletes while other schools may not,” guard Tre Demps said.

Though many Northwestern players acknowledged certain advantages to “extra benefits” like those given at Syracuse and “automatic-A paper classes” like those at North Carolina, they also saw the value in getting a real education.

“As much as I would love to get extra free stuff and take fake classes, I do think my ability to get a stable non-basketball career in the future is a definite plus,” center Alex Olah said.

Overall, several players hoped that one day it might be possible to make the NCAA tournament while also following every single one of the NCAA’s many rules, though Coach Collins and many players have their doubts.

“Playing in the tournament sure seems fun, so I hope our athletic department’s recognition of NCAA rules doesn’t hurt our chances of doing that,” sophomore guard Bryant McIntosh said.

After a shoulder shrug, he added, “either way, at least I can go into consulting after graduation.”