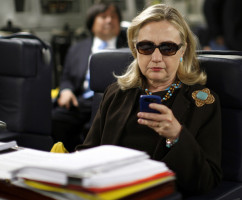 BROOKLYN – In light of the upcoming presidential elections, former Secretary of State Hillary Clinton has attempted to up her ratings with younger voters by sending out thousands of “Follow 4 Follow?” tweets.

According to sources familiar with the candidate and her campaign, Clinton felt that her campaign was not mesmerizing the demographic of 18 to 25 year old voters in the way she originally believed it would. In order to gain their support, she thought it would be best to communicate with them more personally on a popular social media website.

“Kids these days are all on their phones doing the texting and tweeting I believe they call it,” Clinton told Flipside reporters. “I figured if I want to connect with these youngins I better start speaking their language!”

Taking to her verified twitter account, the newly liberated Clinton immediately began tweeting whatever came to her, but initially received no favorites or retweets given the nonsensical and incomprehensible nature of her blurbs. One of her first few tweets, almost immediately removed by her team following focus groups’ concerns about pandering, read: “can’t wait to bring the beat down on all these haterz #imwithher dawg.”

Sources inside the campaign indicate that she decided to change up her approach after seeing a tweet from her young nephew that indicated a sort of follow share. When she saw the amount of followers he had, she decided to implement a “Follow 4 Follow?” campaign, which immediately took off, gaining Clinton close to 500,000 new followers.

“I was sending out tweets every 5 minutes just to make sure no one was missing them,” she said. “And I created an entire committee for the purpose of following back all my new supporters! It’s really the least I can do to make sure Millennials are informed on my positions.”

Clinton is very excited with the response to her new campaign and hopes to gain 2 million more followers by the end of the week.

UPDATE (3:15 PM EST) –  Despite her major success with the “Follow 4 Follow?” campaign, Clinton has since abandoned the project due to the fact that most of her new followers turned out to be middle and high schoolers below voting age who were also just looking to up their follow count. The Flipside regrets the error.