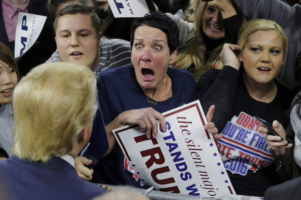 EVANSTON – Following recent reports that Donald Trump is likely to be the Republican nominee, the Northwestern College Republicans have changed their organization’s party affiliation to the Northwestern College Independents. “We feel that being the College Republicans only worked to exclude other groups who hated Trump as much as we did,” said exec member and leading advocate for the name change Joe Przybyszewski (WCAS ’17), “therefore, our switch to being the College Independents will not only boost membership, but will allow us to be more tolerated on campus as well.”

Some, however, were not pleased by the recent change. Gene Markakis, MEAS ’16, President of Wildcats for Trump, was furious about the recent shift: “Just when America is about to be made great again, those assholes decided that they wanted to be more ‘inclusive;’ well inclusive my ass. I believe in capitalism and freedom and apple pie and the smiles on babies that will grow up to have incredible knockers—sorry I lost my train of thought. Well I guess we’ll have to show them how wrong they are, and do it in a way that would make Mr. Trump proud.”

Recently, protests and fights have broken out outside of the College Independents’ meeting place by members of Wildcats for Trump. Also, members of the College Democrats were seen standing by the protest as well, eating popcorn they all had to share.