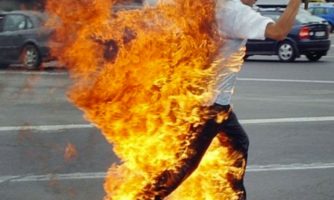 CLEVELAND – From the ashes of recent tragedy, a new study out of Case Western Reserve University seems to confirm the not-wholly-unexpected fact that theatre majors are, indeed, flammable. The experiment sparked national attention when it was first published in the journal Annals of Internal Medicine earlier this month, taking heavy criticism for its potentially discriminatory attitude towards ESFJs—as measured by Myers-Briggs—and for its possibly unethical potential for grievous bodily harm caused by combusting theatre majors.

Working off preliminary data collected from four years of Cleveland Critics Circle Theatre competitors, researchers Wallace Foreman and Nancy Bhutani have found a correlation between being a theatre major and having properties conducive to being on fire, what the paper referred to as theatre majors’ “abnormally high propensity for immolation from the cellular level.” “For some reason—and really, this is the reason we thought it worthy of tax-payer funding—instances of theatre majors spontaneously catching fire were unusually high during the spring musical season,” said Bhutani in a press statement released this past Thursday.

Wallace and Bhutani recommend that those who are familiar with theatre majors should try to better provide the constant love and attention that seems to act as a substitute for normal forms of digestion. Given theatre majors’ tendency to spontaneously combust after 14-hour rehearsals and their ability to avoid breaking character at all costs, we at the Flipside recommend following the fire code in Shanley Pavilion.