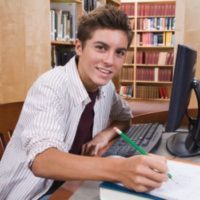 After finishing his second week of college, local freshman Tim DeWitt, WCAS ’20, became confident that his dream girl would be in his classes next quarter. “It was rough at first when I realized that my soulmate wasn’t in any of my classes this quarter, but she’s definitely going to be in next quarters. I mean, it only makes sense.”

When pressed on why his dream girl could not been in any of his classes this quarter, or why he is searching for his soulmate only two weeks into the start of the year, DeWitt stated that it was only fate that he meets his dream girl in college. “It’s like every romantic comedy I’ve ever seen, you know. The guy and girl have their eyes meet as they try finding their seat on the first day in class, end up sitting next to each other, start a short conversation, and the next thing you know, they’re off fucking like there’s no tomorrow.”

When asked about DeWitt’s behavior since he got to Northwestern, his roommate Ben Black, WCAS ‘20, stated that “that dude has been harassing every girl he meets. He’s trying to pretend he’s Romeo when he comes off as a coked-up Charlie Sheen every time he talks to a girl.”

Regardless, DeWitt has continued to state that his dream girl would be in next quarter’s classes. Confirming that two of his classes next quarter are Intro to Gender Studies and Intro to Macroeconomics, where “girls will literally be filling the auditorium.”