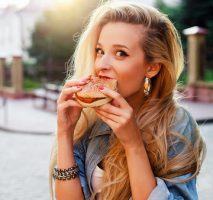 Annabelle Kempe, WCAS ’20, in a disappointing display of ignorance, pledged to abstain from sexual activity one day a week as part of the “Meatless Monday” movement on campus.

Reports state that Kempe was approached by a representative of Meatless Monday, an organization that encourages people to eat less meat in an effort to promote global sustainability. When accosted on her way to Norbucks, Kempe signed the pledge, telling the representative, “This could definitely do me some good. My jaw gets very sore from handling meat so often.”

According to Kempe, the impetus for her decision was a way for her to instill some self-control and balance in her life. “It’s like, I’m finally away from my parents and there are just so many cute guys here! During Wildcat Welcome, the ‘dub-dub love’ wasn’t just coming from my PA, you know?”

It didn’t take long for Kempe to learn about her misunderstanding when her friends looked on in confusion when she ordered a cheeseburger in Allison this past Monday. As her friend Janie Davis recalls, “She told me about the pledge the day before, and now I’m seeing her act like some ravenous beast? I thought she had stronger willpower than that.”
Upon finally realizing the pledge had to do with consuming animal meat, Kempe responded in earnest, “Animal meat? Really? I never expected people would be into that. I guess I’ll have to wait until Tuesday to try it!”