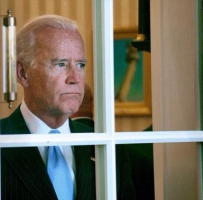 Vice President Joe Biden has taken it upon himself to bring a little bit of joy back into the most negative election campaign in modern political history. Late last Thursday evening, a White House staffer discovered the Vice President stuffing Halloween candy in between the couch cushions in the Oval Office, in the hopes that it’ll brighten the next president’s day.

When the staffer inquired as to what he was doing, Biden reportedly told him to “check his email.” His master plan, complete with detailed blueprints of the West Wing, has been circulated among the upper level White House staffers, but most haven’t responded to the email, however, because they have deleted it before reading it. Biden has already begun carrying out his plans, placing an order to construct a perfect replica of the president’s desk made entirely of chocolate.

“I talked to both Hillary and Donald to figure out their candy preferences,” said Biden. “I saw on WikiLeaks that she likes Butterfingers, and she backed that up when I asked her on the campaign trail. Donald said he likes ‘100 Mil’ bars, which, I think, is a bunch of 100 Grand bars all melted together.”

When asked why he would go out of his way to hide candy around the Oval Office, Biden said, “What if one day the President was like, really hungry and really angry and reached for the nuclear codes but found a Snickers instead? How great would that be?”