AP Calls Illinois for Clinton Before Polls Even Open 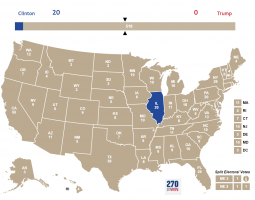 Illinois has not voted for the Republican presidential candidate since 1988, a streak unlikely to be broken this year since the AP has reported that Secretary Clinton has already carried the state. According to a press release published early Sunday morning—two days before Election Day—Clinton had won the state by margins that made it statistically impossible for Trump to catch up.

Reporters at the AP have been watching early voting in the state since it started on September 29, and according to their independent interviews with voters, they are certain enough in the outcome that they have already added Illinois’s 20 electoral votes to Hillary’s Election Day haul. This is the first state to be called in the 2016 election, though California, West Virginia, and Wyoming are expected to follow as soon as their polls close on election night, with 0% of their precincts reporting.

When asked why the AP would call the race even though it would likely depress turnout before the election, Executive Editor Kathleen Carroll said, “It’s the AP’s journalistic duty to report news when it happens or when we make it.” The news service had previously called the Democratic Primary before California voted, but Carroll expressed surprise when it was suggested that they were colluding with the Clinton campaign. “It was a foregone conclusion.”

The state was never expected to be closely contested this year, even as every part of the state outside of Chicagoland is rural and white enough to be demographically favorable for Trump, because the areas around the Windy City are overwhelmingly blue. Despite being namedropped more than “Barack Obama” during the debates, the city of Chicago was uncontested by Mr. Trump, carrying Secretary Clinton to her first win of the general election. In some polling places, not a single vote had been cast for Trump yet—or for Clinton.

Speaking at an impromptu victory party in Cleveland, Clinton seemed thrilled as LeBron James loomed over her on stage. “I’d like to thank the people of the great state of Illinois for interrupting their Cubs celebrations to vote early and vote often.”