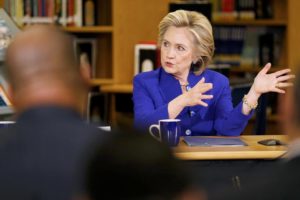 Just over a week after the election, President-Elect Donald Trump already has big plans for his cabinet. As positions such as Secretary of State or Defense get promised away, he’s saved one coveted slot for Democratic nominee Hillary Clinton herself: secretary.

“I was assembling my cabinet, all great people. Great guys. And then it hit me, I mean, she’d be perfect for this,” Trump said last night. “There’s a desk right outside the Oval Office. While she doesn’t know how to work a desktop computer, she’s already great with email.”

The Trump transition team suggested that the job offer was Hillary’s biggest win since the popular vote, as it’s in an area “more conducive with her set of skills,” says a new Trump staffer. “She’s already held a secretary job before, so this seems perfect for her,” he told the Flipside after a quick, cursory glance at her resume. “The health benefits are great too. Full dental.”

The rest of the Oval Office staff hopes she’ll accept President-Elect Trump’s offer, as womanly hands are more adept at handling the espresso machine and they just can’t seem to figure the darn thing out. The general expectation is that Clinton’s role as secretary will become the go-to example of a great American tradition: placing powerful, capable, intelligent women at the secretary desks of their bosses.