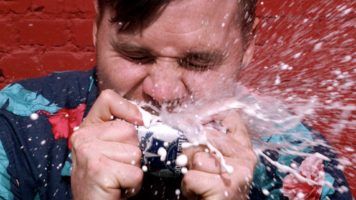 According to sources on sophomore Harry Lutkin’s floor in Sargent, Lutkin isn’t quite the “go-getter.” But something must have changed Tuesday morning when his floormates witnessed him walking into the bathroom with a toothbrush in one hand and a nice, cold PBR in the other.

Right away, roommate Jack Dowling could tell there was something special about this day. “Those of us with 9 a.m. classes are all usually in the bathroom at the same time. When I saw Harry walk in, I immediately thought ‘Wow. We’re about to witness something amazing.’”

Witnesses say Lutkin strode into the bathroom, said “hey” to Dowling, then stood in a shower stall to shotgun the PBR. He then proceeded to turn on the shower to wash off all the excess beer that had dribbled down his neck and chest all while brushing his teeth and gargling with the shower water.

“We were all just staring. It was like we’d seen God, or Margot Robbie naked,” said Dowling. “By the time I got back to the room he was gone, leaving three crushed cans left in his wake, which means he either went to class or Burger King to get chicken fries.”

By the end of the day, the inside of Lutkin’s room was littered with seventeen cans of beer, two empty boxes of Domino’s, and three half-eaten family-size bags of Doritos. As floormate Spencer Dayton said, “I was just so floored. I’d never seen Harry with this much drive, this much perseverance and devotion to a cause. I think all of us here are just feeling really proud of him today.”