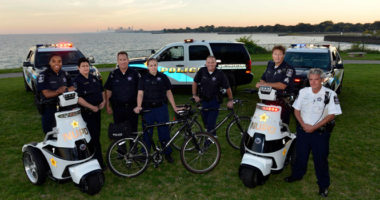 At 5:45 PM yesterday, a local police officer assigned to the Lakefill warded off what could have been a bitter crisis for one beleaguered student’s GPA.  The day seemed normal enough when suddenly eyewitnesses noted one Larry Iverston, SESP ‘19, maniacally trying to prop up his laptop on the grass. Fortunately, while onlookers were paralyzed by the seemingly deranged student, police officer Robert Wright knew exactly what to do.

“I was doing my last round along the Lakefill before hitting the bottle when I saw this desperate kid organizing his pencils by the lake,” Wright recounted with a voice as rough as a Sheridan road pothole, “and, as I looked closer, my suspicion was confirmed. This poor sonuvabitch was trying to study.” He stopped the interview for a moment to take another drag from his cigarette. “All these other onlookers just stood by clutching at their pearls but I’ve seen every inch of this school’s festering underbelly and I knew I had to talk this kid down.”

At this point, reports indicate that Wright slammed the breaks on his golf cart, pulled over, and whispered something in Iverston’s ear. Wright refused to specify what he said for confidentiality reasons but Iverston himself was open to discussing his situation.

“When you’re a kid you see it in the movies all the time. People sitting outside, doing homework being happy… But you don’t realize it’s just a stupid fantasy. When a nice day comes along, you get taken in,” Iverston stated. “You tell yourself that you’ll be different. That you can break the mold and keep studying.” he added. “But I’ve got news for everyone out there: you’re wrong. Don’t become another statistic.”

According to Iverston, people planning to study on the Lakefill will tell themselves almost anything. They’ll say that the sun won’t be too bright, that the wind won’t be too intense and, most of all, that it’s definitely possible to study while lying down and relaxing in the grass.

Although Wright’s heroism is indisputable, the crisis is far from averted. “I see shit like this every day and it always goes to hell in the same way,” Wright explained, “Iverston got lucky but not everyone is.” At press time, NUPD reported an increasing number of frighteningly oblivious students being drawn to the Lakefill due to warming weather and approaching exams.