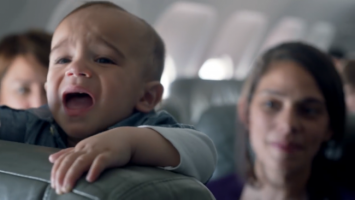 A new study out of O’Hare International Airport has found that babies, when punched, will actually scream more and louder than they already were. Behavioral scientist Louis Caldwell, who conducted this study on his already delayed plane, was seated next to a crying toddler and its mother for over two hours before takeoff.

“It was at that moment, stuck between the curved wall of the airplane and the ear-splitting wails of youth, that a hypothesis was born. I haven’t been asked to help on any research teams in years due to my anger-management issues, so I saw an opportunity!” said Caldwell, smiling proudly.

According to onlookers, the UChicago adjunct balled up his fist—full of scientific curiosity—and punched the “already-sobbing, tomato-faced little shit” square in the face. Following this, the screams from the child were amplified tenfold, to the point where Caldwell swore he saw the plastic windows flex. Caldwell’s further fist-based experimenting was interrupted by a purse to the forehead, followed by the scientist being dragged into the aisle by an air marshal.

“I must warn all those at home, one should never attempt this experiment unless in proper laboratory conditions. I didn’t account for external variables, which may have contaminated results. Also, I figured the mother, of all people, would be happy for me to try to shut her kid up,” warned a sober Caldwell, running his fingers over a fresh scar from where the zipper on the woman’s purse caught him.

While the University of Chicago has suspended Caldwell for his unorthodox research methods, the scientist is not dismayed: “I must admit I was upset that, yes, my hypothesis was incorrect, and the baby continued to scream more after being punched. But that tiny bastard had it coming.”

When asked by reporters whether he’ll continue his experiment next time he flies, Caldwell confessed he likely would, but would wait for the mother to get up for the bathroom first before “giving the runt what-for.”