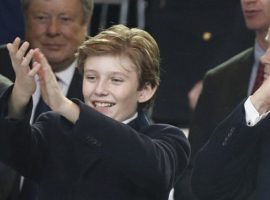 According to sources near to the Trump family, Barron Trump’s laughter has been heard every day echoing through the gilded halls of Trump Tower as he is entertained by puppet-governments. The ten-year-old multi-millionaire has shied away from most sports and games, but has found watching the spineless husks of politicians jump around to be endless delight.

“It’s been a godsend. Instead of having to read him stories, or run around playing hide and seek, I just pop on C-SPAN or Fox News and he’ll be giggling gleefully in no time,” said Bill Marcellus, head of security and personal attendant to the youngest Trump.

The baron Barron used to spend many a weekend putt-putting around on the family owned Trump International Mini-Golf Course. But now the silly escapades of government officials being broadcast through various news networks consumes much of young Trump’s attention and time.

Several sources close to the Trump family have voiced concern over how much time he spends watching the soulless pawns dance across the screen, but Marcellus isn’t worried: “If anything, this is what his father would have wanted. He’s following in [Trump’s] steps, watching Fox News all day, occasionally requesting a Coke or a couple scoops of ice cream. Barron is doing his father proud!”

When questioned by Flipside reporters about his new hobby, Barron Trump enthusiastically replied, “This is the greatest toy Uncle Vlad has ever given me. A whole puppet show, designed just for me! What makes it even better is that you can’t even see him pull the strings!”

At press time, sources report that Barron Trump has become fascinated with creating great white pillow houses, stomping through them while shouting “Glory to the Kremlin!”, and raising a lightsaber-turned scepter in triumph.