Junior About to Miss Throwing Trash into Garbage Can: “Kobe!” 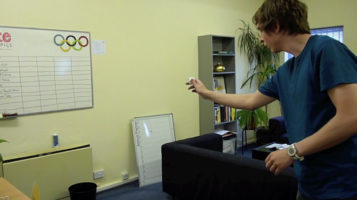 Greatly overestimating his own skill and accuracy, Weinberg junior and failed sportsman Michael Buchanan yelled “Kobe!” at his friends, mere moments before tossing some trash at a nearby garbage can and completely missing.  “You could really see the moment where both his dreams of emulating the great Kobe Bryant and his throw fell short; he was crushed,” said study group member Anita Smith, WCAS ‘20. “As the words leapt out of his mouth, the paper hit the wall with a sickening thud and rolled sadly under a nearby desk while Michael looked on in horror.”

After he had come to terms with the fact that every coach who had ever benched him was right, onlookers reported that Buchanan slowly got up and shamefully walked to pick up his garbage after the “equally garbage free throw”. Upon grabbing it, Buchanan attempted a “redemption shot” by shouting another “Kobe!”, at which point he pegged Smith square in the eye.

Following the two failed throws, professional study group casters are saying this is Buchanan’s worst gaff yet since the botched “pull my finger” play in 2015, where he failed to flatulate for comedic timing after asking another member to pull his finger.

At press time, rumors have begun to spread that the head TA of the study group, Gary Madison, SESP ‘18, might trade Buchanan to another session: “We’re not entirely sure that Buchanan is right for this study group, but right now we’re just seeing if a little time away from the game will give him the rest he needs to throw garbage away at a college level.”

Featured, Local, No. 231 basketball, Kobe, Study Groups, TA, Tag your friends in this fun content so they can relate too