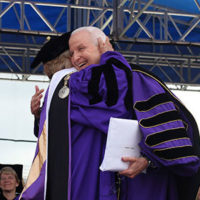 McCormick sophomore Jack Emerson was awarded an honorary doctorate from the university yesterday for achieving what no other McCormick student has before: getting laid. The ceremony took place in Cahn Auditorium, packed with every McCormick student and faculty member, with lines out the door all the way to Tech. Sir Fraser Stoddart, 2016 Nobel Prize laureate for his work in mechano-stereochemistry, could be seen weeping tears of joy in the front row.

Charles Li, Emerson’s suitemate in Slivka Residential College, described his take on the events: “I was shocked when I saw Jack bringing a girl into his room that night.” He went on, “I put my ear against his door a little while in and was honestly shocked I didn’t hear Rick and Morty or old episodes of Bill Nye the Science Guy coming from his laptop.”

Emerson was awarded his doctorate personally by President Schapiro, and received a standing ovation after the hand-off occurred. “This remarkable young man,” spoke Schapiro, “sets a shining example not just for McCormick engineers, but for hopeful students and professionals all around the world. Mr. Emerson’s heroic actions epitomize Whole-Brain Engineering.”

When asked about the experience, Emerson responded, “Yeah I guess it was a pretty good lay. I really didn’t think much of it at the time, but looking back on it now, I hope my experience can serve as an example for all the lonely engineers waiting around every night for their roommates to leave so they can jerk off into a pile of EA books. We’ve all been there, and I promise there’s a light at the end of the tunnel.”