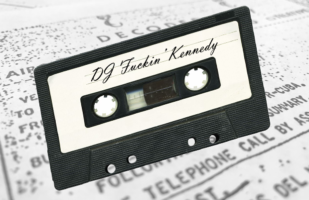 Among the tidal wave of classified memos, documents, and FBI reports, the JFK files released this week revealed a surprisingly solid mixtape by the president himself. The unearthed cassette tape, with the words “ … Look we all know you didn’t read this … D.J. Fuckin’ Kennedy” crudely scrawled in Sharpie on the front, is a collection of absolute bangers from the 50s.  The tape includes hits by Elvis Presley, … Chuck Berry … , Little Richard, and, more strangely, The Coasters’s ‘Yakety Yak’.

The mixtape also contains several originals by the MC in Chief, with the president dropping bars at every turn: “A rising tide lifts all boats, but keep talking shit Castro and we’ll see how long Cuba floats”. Historical analysts and … classified informant Dick Throater … have determined that these beats are, in fact, sick, but unfortunately never saw the light of day because “they would have blown the American public’s mind, figuratively, of course”.

Even more confounding is the discovery that Marilyn Monroe’s performance of “ … Happy Birthday Mister President … ” appears on the tape … fourteen … times in a row, each time with heavier and heavier breathing heard in the background.

At press time, a second mixtape belonging to … LBJ … was discovered in the documents containing a Kennedy diss track, where historians, government officials, and fringe theorists finally all agreed that “Lyndon B. Johnson absolutely killed him.”