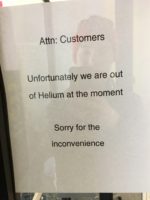 In a revelation that has rocked the birthday party scene across campus, a CVS employee told upset customers Friday afternoon that they were fresh out of helium.

“It’s the darnedest thing!” squeaked manager Mark Shales. “People must have really been buying up all our balloons and helium without our notice,” his pitch dropping noticeably mid-sentence. Afterwards he went back in, allowing for a thick cloud of gas to slip out.

The bouncy-castle-loving community has been slow to accept this response, as CVS had closed its doors and shuttered all the windows for the whole day. According to local passerby, the only signs of life inside the convenience store were the occasional sounds of a balloon popping and what sounded like the laughter of a demonic “Alvin and the Chipmunks” reunion.

CVS has been quick to condemn these rumors. “These allegations against our staff and their competency is sheer slander. We are committed to getting the Local Clown Coalition (LCC) all the helium it requires to perform their jobs,” stated Shales, moments before a high operatic C was heard singing from the partially open door followed by another chorus of demonic chattering.

At press time, Shales having taken a hit of a tank behind him, voice like an elephant, made a final statement to reporters: “While we have run out of helium, in consideration to all our customers, we’re offering a sale on sulfur hexafluoride,” before burping in such a way to make the very ground shake.