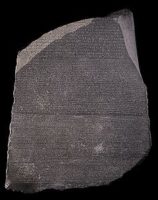 Students and faculty were shocked last week when results from a DNA test confirmed the Northwestern rock is a second cousin of the much more successful Rosetta Stone. Sources confirm that up until this point, nobody could have fathomed the world-famous ancient artifact, housed at the British Museum in London, could in any way be related to a boulder that averages two viewers per day on a YouTube live stream.

“I mean, it’s just embarrassing to look at the difference between the two,” said Dean Adrian Randolph. “One contains an invaluable amalgam of hieroglyphs, Demotic script, and Greek script; the other is an advertisement for Dance Marathon.”

Many students, such as freshman Don Skaegan, were quick to express pity for The Rock. “It doesn’t matter if The Rock isn’t the best in his family. Prestige isn’t always the most important measure of value,” he said. “Like, some universities are more prestigious than us, but fuck UChicago!”

Others, like Psychology professor Simon Froind, were very excited by the discovery. “This explains so much about The Rock’s psyche,” he said to Flipside reporters, “It knows it’s a total failure compared to its cousin, so it covers itself in paint to mask its own inferiority complex. Truly fascinating.”

Although not nearly as renowned as the Rosetta Stone, The Rock still has high hopes for the future. It plans to move to Los Angeles next month to audition for the role of Rock #4 in the upcoming Marvel film Rock Boy: Revenge of the Stones.