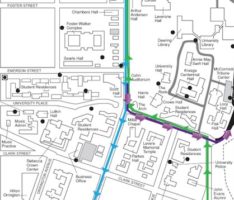 After hearing about President Trump’s plans for a military parade on CNN student news, Northwestern president and chief executive authority Morty Shapiro plans to mimic these efforts by parading the entire Economics department down the entirety of Sheridan Road.

“Oh yeah after hearing Carl Azuz telling me all about how Trump’s gonna show everyone his tanks and guns and nuclear weapons of mass destruction, I thought, wait a minute, what do I have complete dominion over? And then it hit me: a 10 billion dollar endowment and some of the world’s most brilliant minds.” Shapiro then described how he called the Economics department together with his big red button on his desk.

As laid out via press briefing, Morty will begin by sequestering all of NUPD (on and off duty) to blockade Sheridan from any traffic for one week before and after the parade in order to accommodate a lengthy set up, preparatory stage and an equally long tear-down stage that will conclude with a block party.

The parade itself aims to garb the Economics department in costumes of Morty’s favorite superheroes and TV characters. Tenured professor Jack Añejo, who specializes in long term economic depreciation in countries with overprotected GDPs, told sources, “I’m dressing up as Barney the dinosaur and marching down snowy Sheridan Road to the beat of Katy Perry’s Roar.”

At press time, eight people have RSVP’d on Morty’s Facebook event and at least hundreds are expected to attend once Morty offers a free quarter of tuition to everyone who shows up.