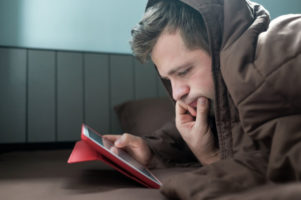 Expressing dismay at the large amount of time he would be giving up this weekend, area student Tim McClouth, who this quarter has logged upwards of 10 full days watching various TV shows and movies on Netflix, told reporters that he is pissed about Dance Marathon’s 30-hour commitment.

“Don’t get me wrong, I like that it’s for charity and all, but does DM really have to take 30 freakin’ hours? It’s gonna kill my whole weekend,” McClouth, who spent eight hours one Saturday in January watching Trailer Park Boys, said.

“I mean, I feel like I could do DM in one afternoon and get the same out of it,” continued the same person who watched every season of American Dad at least three times to “pick up on the subtle jokes” he may have missed at first.

Sources close to McClouth confirmed his sentiment. “Yeah, Tim’s been acting all put out because of DM, and whenever he feels that way, he usually starts streaming a classic crime noir or 90’s sitcom,” his roommate Jared Simmons said, noting that McClouth also binge-watches content whenever he’s tired, stressed, relaxed, brooding, or upbeat.

At press time, McClouth had just purchased an HBO GO subscription as a reward for meeting his DM fundraising goal.