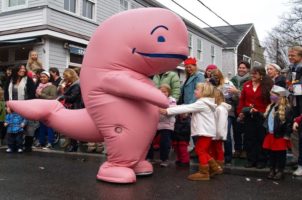 Following an exciting Dillo Day, local sources have confirmed that the Vineyard Vines whale seen on the Lakefill was actually an ETHS student looking to cop some beer. The whale was reportedly seen going up to students, taking pictures with them, then asking, “you got some booze I can bum off you,” in the deepest voice he could muster.

When a walking pink whale comes up to you, with that little smile on his face, and gives you a hug, how could you not do whatever he asks?” said NUPD officer Terry Smith. Smith was initially fired after the incident was reported, but after sharing with his superiors the photo he took with the whale, he was quietly reinstated.

Eventually, the mysterious whale was found lying unconscious on Sheridan Road, having been mistaken for an interpretive art piece. When asked to explain his actions, he told reporters to “fuck off” and that he had to get home before his parents found out what he was doing.