Catholicism to Officially Change Name to “Pritzianity” After Large Donation 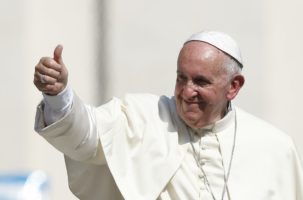 In a public decree, Pope Francis stated that in order to move the religion to the modern era, the official name of Roman Catholicism should be changed to Pritzianity.

No other reasoning was given for the change other than that the new name “sounds cool,” and it was stressed that the name change had nothing to do with the large, anonymous donation the Holy See had received from the Chicagoland area.

“We had to make the change, okay? It’s not even that big of a deal what our religion is actually called, and four billion dollars is a LOT of money. Think about how many small bread wafers and swinging incense thingies that could buy us!”

Sources in the Vatican indicated that the anonymous donor was unsatisfied with the public response to the name change, and for some reason was demanding that Pope Francis declare Illinois Governor Bruce Rauner to be the Antichrist.

However, the 266th Pope is reportedly not budging until a further contribution. “I get the whole camel through the eye of a needle thing,” he told a select group of advisers yesterday, “but I really need that money to fund my blood of Christ habit.”