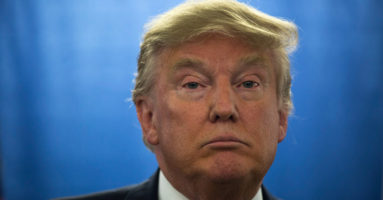 Confusion broke out this past Friday in Washington as the Trump administration put out a new executive order, which appeared to just be a word-for-word copy of the biblical book of Leviticus.

In the new order, which President Trump described as “well within the bounds of his powers” in a tweet at 3:40 AM, the president refers to himself as “The Lord” upwards of seven times. He also calls for women who have recently had their periods to be banned from society for seven days and forbids the general public from sacrificing animals with bruised testicles.

“Look, it’s just what the people want,” said President Trump as he attempted to stone to death a blaspheming CNN reporter. “America is becoming a lawless state. And with these criminals coming in from Mexico, we need to go back to the laws of our forefathers. I’m talking banning people from eating pig, having mixed fabrics in clothing, or going to church within 33 days after giving birth. Mike [Pence] thinks it’ll help a lot.”

At press time, President Trump had already cancelled the executive order after realizing that it would have banned slander, lying, showing partiality to the rich, and of course, letting your hair become unkempt.