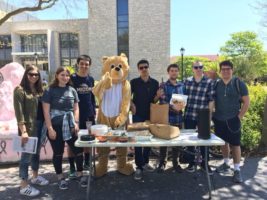 After a sudden onset of clinical depression, Northwestern undergraduate Gregory Chen (WCAS ‘21) made the decision to join a satirical publication dedicated to what one member called “IRL shitposting” rather than follow the advice of a medical professional and seek help from a licensed therapist.

“I can’t get out of bed in the morning, but you can bet that I’ll have a good time riffing off of that for the Flipside,” said Chen of his choices. After a moment of consideration, he added, “Well, as good a time as I’m capable of having. Let’s say, I have a pleasingly bland time. Tears of oblivion burn my eyes less when combined with a good ol’ hearty chuckle.”

Chen is only one of a recent influx of what CAPS considers an epidemic of students opting to waste their lives making dick jokes with other depressed students weekly in Kresge Hall.

The epidemic is causing a sociological phenomenon known as ‘brain drain’ where perfectly suitable up-and-comers use their journalistic talents on roasting Morty and his increasingly detailed lore. Some say this tidal wave of wasted youth may actually get the school to start caring about its charges’ mental health.

This reporter would continue with the story to reveal the underlying causes of Chen and his peers’ decisions, but honestly, she’s very tired and ready to stare at the ceiling for hours wondering when all her friends will reveal that they secretly hate her.