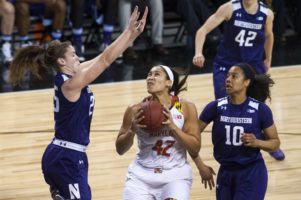 After 44 years of having naught but a collection of empty lipstick tubes wrapped in menstrual napkins to dribble, pass, and shoot with, Northwestern’s women’s basketball team has at long last been promised a real live basketball for their practices next year.

“A basketball, like what the boys play with? No foolin’?” exclaimed an excited Jenny Washington, (female) point guard, in response to the news. “Golly, I sure hope my uterus doesn’t get jostled too much, what with all the bouncin’!”

Not all are happy with the coming changes, however. An unnamed source expressed his distaste with Northwestern athletics joining the 21st century. “These broads sure got some nerve, thinking they have any right to sweat in front of me, a man, in the first place,” said the disgruntled source, “What’s next? They nag me to respect them? Please.”