Sex Week To Be Followed By Herpes Simplex Week 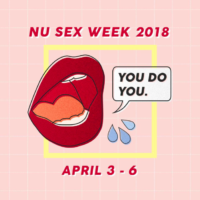 A recent announcement by Northwestern states that this year’s Sex Week will be followed by a new event called Herpes Simplex Week. The decision comes in response to the alarming rate of STIs among the few students having sex at Northwestern.

Farrell also offered some insight into the university’s naming process for the event, remarking that “Human Immunodeficiency Virus Week just didn’t have the same ring to it.”

Brad Kaufman, a senior, expressed his approval for the upcoming event. “Dude, Herpes Simplex Week is gonna be so dope. I’ve probably got more STIs than I can count, so it’s gonna be really cool to finally find out what some of them are called.” To punctuate his words, he stapled a few condoms to his wall in preparation for a hookup later that night.

Kaufman’s roommate, Mark Schubert, had similar sentiments, saying “Yeah, I have sex. So much sex, all the time. STIs are definitely something I have to be concerned about.” As he spoke, he shot nervous glances towards an unopened box of condoms under his bed for unknown reasons.

Students are reminded that the announcement of Herpes Simplex Week has nothing to do with Herpeze Simplex, the musician who will be headlining at Dillo Day.