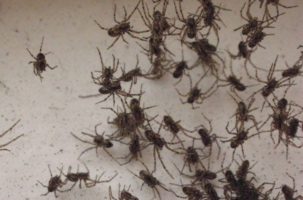 A group of researchers here at Northwestern University has made a huge, and potentially frightening, discovery. Their report claims that there are thousands of invisible spiders crawling all over everyone at all times, and the only way to see them is to take the drug DMT.

Foreseeing what they described as “ethical issues” with making civilian subjects take the drug, the researchers elected to perform the test on themselves. The scientists split into two groups, one being the control group that took nothing and the other group taking DMT. Each person in the experiment recorded their observations. The DMT group reported that they were able to see a surprising number of arachnids crawling around on everyone in the room, while the control group reported that they saw no such creatures. As a result of these data, the research group has determined that taking DMT is the only way to see the spiders and that they are otherwise invisible to the naked eye. Then, the control group decided that they might as well just take DMT too, because they “wanted too.”

This discovery may seem like a cause for concern to the general population, but the researchers claim that the spiders do not seem to be capable of harming their hosts. However, their article does warn that anyone who takes DMT in order to see the spiders should know that “It’s a fucking terrify thing, especially when they whisper in your ears about opening your mind’s eye and being the key to heaven’s eternal gate.”

While some might think that this result warrants no further research, the scientists disagreed, spending their next three years of budget on more DMT.