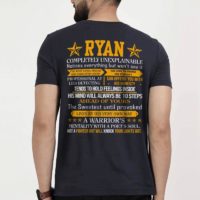 On April 12, Paul Stanford, McCormick ’21, purchased a shirt that was sure to change his life. “It had the atomic symbol for iron on it, then said irony underneath,” exclaimed Stanford, who was so excited at the opportunity to discuss his shirt with our female reporter that he almost peed his pants.

“Unfortunately, no one has taken the time to read and appreciate my shirt,” claimed Stanford, “Not one woman has pointed at the shirt and laughed, and that usually happens no matter what I am wearing!”

Simon Drexler, WCAS ’22, has encountered a similar problem. He recently found a shirt online that expresses his vibe more than a tinder bio ever could. “The shirt says Simon at the top. Then it says, ‘utterly unique,’ which I am. Below that it says, ‘super kind and supportive friend.’”

However, Drexler believed the rest of the shirt described him even better: a dedicated lover and good at using his tiny peepee. Sweet but a little salty because his diet consists of only French fries. Professional animal lover but doesn’t engage in bestiality! Heart of a lion but only hunts endangered animals. The kindest until provoked. Not abusive but can knock you out.

“I couldn’t have described myself better,” said Drexler. However, he maintains disappointment that no women have taken the time to read his shirt and realized how awesome of a guy he was.

An earlier version of this article listed Drexler as single. Drexler obtained a new girlfriend, Cinnamon, whilst wearing the shirt. Sources report that Cinnamon is illiterate and quite possibly a frog.