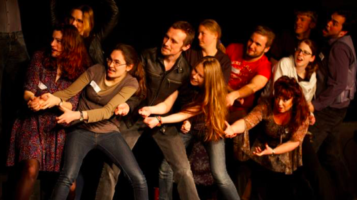 As any new Northwestern student who googles “what is improv” five minutes before their audition knows, the only rule to the Chicago-founded comedic art form is saying “yes.” But if that’s the case, then why did every improv group on campus say “no” to me?

I’m talking Titanic, Mee-Ow, ODB, The Bix, even the Panini Players. They all said “no.” I didn’t even get a single callback. I say they’re a bunch of hypocrites.

If they were really committed to the art of improv, then obviously they would know the golden rule of saying “yes, and.” Like “YES, you did just strip naked and thrash around on the floor like a pig rolling in mud,” “AND, just for that we’re going to make you our team mascot!” Instead it was just a bunch of “no’s” and “buts.” Like “No Jeremy, stop taking off your clothes!” and “But pigs don’t even make those noises!”

It is a truly devastating world we live when a man is forced to pay $175 for a pair of funky pants, only to have to rip them off at the nearest suggestion, and not even get a callback. But so be it. I’ll just go form my own improv team all by myself, where no one can say “NO” to me, and I can take my clothes off whenever I want!

Catch me talking to myself in a baby voice, Friday nights 8pm to whenever I cry myself to sleep, Allison Room #426. $5 cover charge.