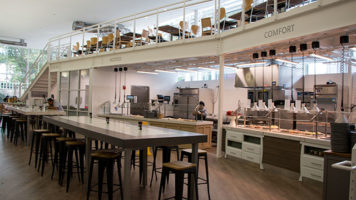 After Allison reorganized its cafeteria into an inefficient maze, Allison’s Kosher Station drastically rose in popularity. Recently, however, many students noticed a strange gunk dripping from the wall. Some students report the “Kosher” sign had been painted over in black. Upon questioning the workers, the students learned that their favorite station had rebranded as “Avoiding Sin.”

Northwestern Dining representative, Kathy Jahns commented, “We made the decision to rebrand the Kosher Station in order to streamline the aesthetic of Allison dining hall. The Kosher Station was updated in order to follow in the footsteps of the ‘Avoiding Gluten’ station.”

Chef Dunn Withyershitt commented, “The ‘Avoiding Gluten’ station is purposefully meant to be vague. ‘Gluten-Free’ is really specific. ‘Gluten Free’ would assure kids that the food actually doesn’t have gluten, as opposed to having some ambivalent confusion about it.”

“We wanted to adopt the negative and vague phrasing of the Avoiding Gluten station to the Kosher station,” added Jahns, “since it seemed like students were excited about it, and we can’t have morale getting out of control.”

Other Allison stations have changed their names to negative ones, like “Avoiding Animal Cruelty” and “Avoiding Not Pizza.” If the rebrand proves successful, all NU dining halls are considering rebranding as “Avoiding Cannibalism.”

The University itself is even catching on, delighted at the negativity they’ve been trying to convey subconsciously all along. President Morton Shapiro, after consulting the University Board, released in a tweet that by 2020, Northwestern will be officially renamed “Avoiding UChicago.”